Parents’ night out! Kylie Jenner and Travis Scott got cozy in London as the rapper celebrated his first headlining concert in months.

“Utopia with you,” the Kylie Cosmetics founder, 24, captioned a series of PDA photos via Instagram on Sunday, August 7. In one snap, Jenner gazed into the 31-year-old musician’s eyes backstage as she pointed her phone toward the mirror to capture a selfie. Another pic showed Scott kissing the reality star on the cheek.

“We out,” the Texas native commented on Jenner’s post.

The California native went on to share glimpses of the show via her Instagram Story as she watched Scott perform at London’s O2 arena. Jenner danced along with daughter Stormi, 4, in the audience before continuing to pack on the PDA with Scott after the show.

The on-off couple began dating in 2017, quietly welcoming Stormi one year later. Despite breaking up in 2019, the twosome remained close while raising their little girl. Us Weekly confirmed in August 2021 that the duo were expecting baby No. 2 shortly before Jenner announced her pregnancy via social media.

“She has been trying for almost two years to get pregnant,” a source exclusively told Us at the time. “She has always wanted another kid close to Stormi’s age.”

The pair welcomed their second child, a son, in February. Though they initially revealed the little one’s name was Wolf Webster, Jenner later told her social media followers that the moniker wasn’t set in stone. “FYI our son’s name isn’t Wolf anymore,” she wrote in March. “We just really didn’t feel like it was him. Just wanted to share because I keep seeing Wolf everywhere.”

Since the infant’s arrival, the Life of Kylie alum has only given fans small glimpses of her baby boy, often referring to him simply as “Baby Webster.”

While Jenner and Scott are still settling into life as parents of two, they’ve made an effort to put their relationship first. In the months since baby No. 2 joined the family, the duo have been spotted on multiple date nights — but they aren’t rushing to reach the next level.

“The priority has been about taking care of the kids,” a source exclusively told Us in May, adding that Jenner and the “Butterfly Effect” artist have frequently “swerved the topic” of engagement. “Keeping things between themselves calm and chilled and setting up boundaries that will give them the best chance of staying together in the long term.”

The "Sicko Mode" artist returned to the stage for his first solo show since the Astroworld tragedy in November 2021, which killed 10 attendees. 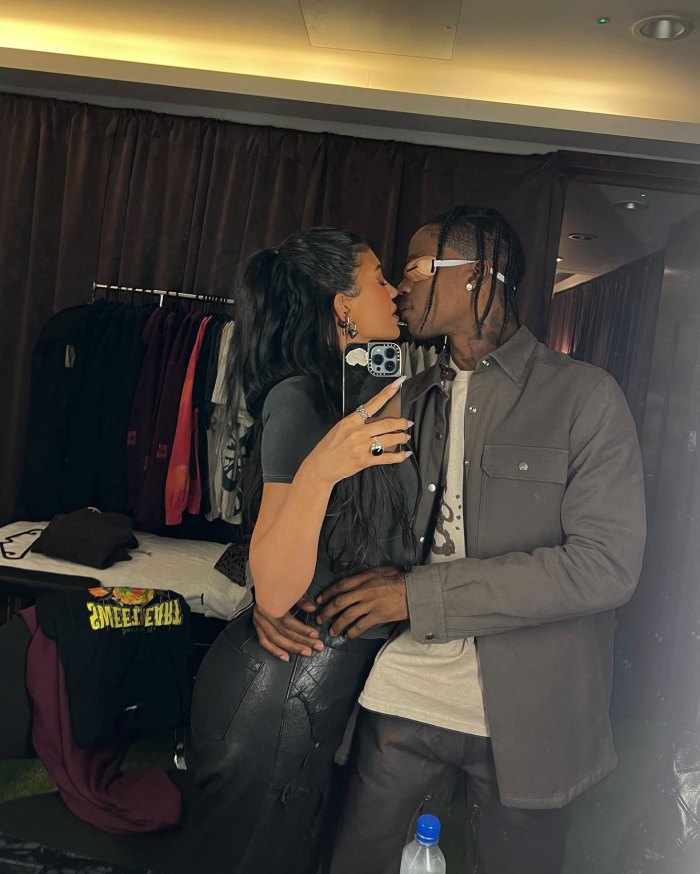