Janice Cayman, Hannah Eurlings and Jarne Teulings scored twice each and goals for Justine Vanhaevermaet and Sarah Wijnants completed the rout in Leuven.

The 19-goal margin smashed the team's previous goals record of 12-0 set against Moldova in September 2017.

Belgium's heavy winning margin was not a record though; there are four occasions where a team has won by a 21-goal margin.

And in Oceania's Women's Championship tournament in 1998, New Zealand beat Samoa -- its first international -- and Australia smashed American Samoa, both with a score of 21-0. Extraordinarily, Belgium had raced into a 10-goal lead after just 34 minutes against Armenia. By halftime, the lead was 11-0, a lead the official team website described as "solid." 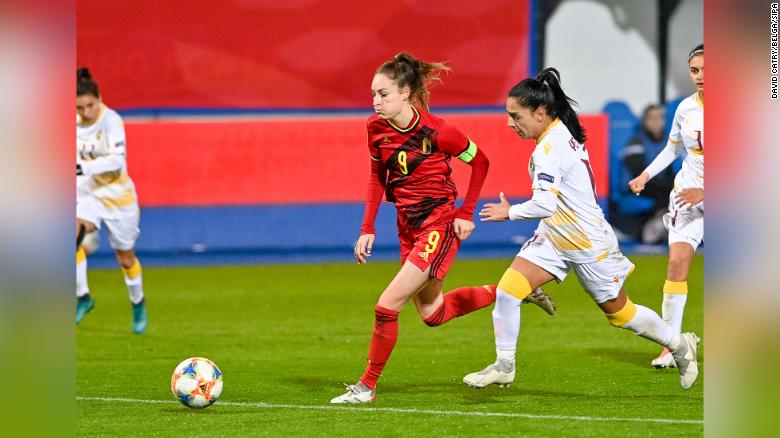 It took the team just five minutes after halftime to equal the team's previous record, with Wullaert finishing between four defenders.

The scoring rate slowed down somewhat afterwards, with Wullaert -- Belgium's all-time top scorer -- scoring her fifth in the 92nd minute only for Teulings to wrap up the victory two minutes later.

"A true monster score," the Belgium team website called the win, which bolsters the team's hopes of qualifying after a disappointing 4-0 defeat to Norway in their last match.

Belgium now sits in third, three points behind Norway, and will face Poland -- who sit second, one point ahead of Belgium -- next time out.

It wasn't the only game that was packed with goals, as Spain beat the Faroe Islands 12-0 and Northern Ireland won 11-0 away at North Macedonia.