Prince Harry has come under fire from royal fans after he appeared to stop singing “God Save the King” at the end of his grandmother’s funeral.

Harry’s biographer, Angela Levin, was among many who retweeted a clip seemingly showing the Duke of Sussex, 38, tight-lipped as those around him sang the anthem in tribute to his estranged father.

It showed King Charles III fighting back tears as Westminster Abbey erupted into a rousing chorus of “God Save the King” to bring the funeral of Queen Elizabeth II to an emotional end.

The king did not sing the anthem, which is an ode to him — and seemingly nor did Harry, who was shown standing immediately behind him, staring forward with his mouth closed for the final 10 seconds of the tribute. 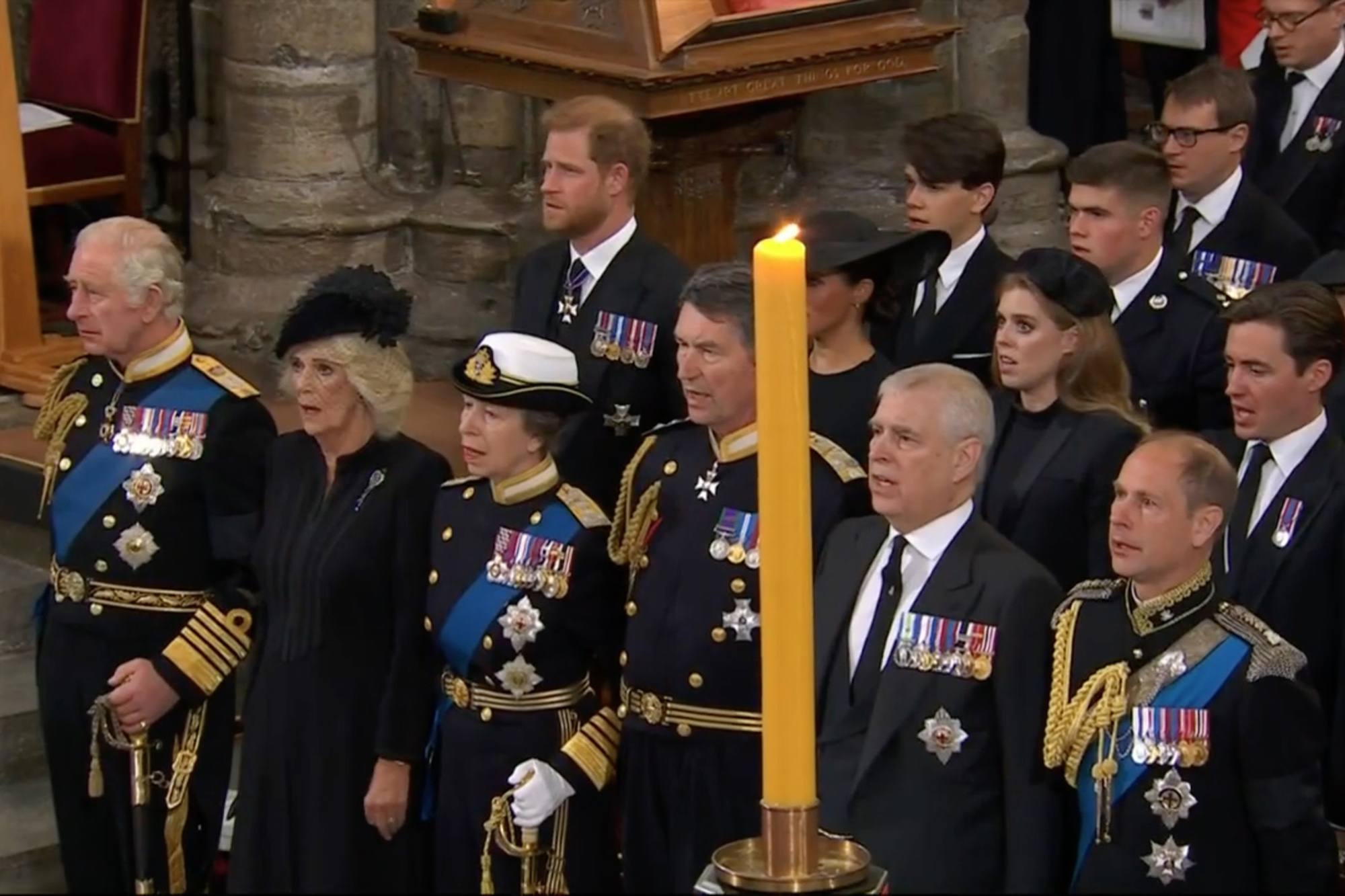 Queen Consort Camilla was clearly singing to the end, as were Charles’ sister, Princess Anne, and her husband, Vice Admiral Timothy Laurence. The king’s disgraced brother Andrew was also moving his mouth in the shot, as were his daughters behind him. 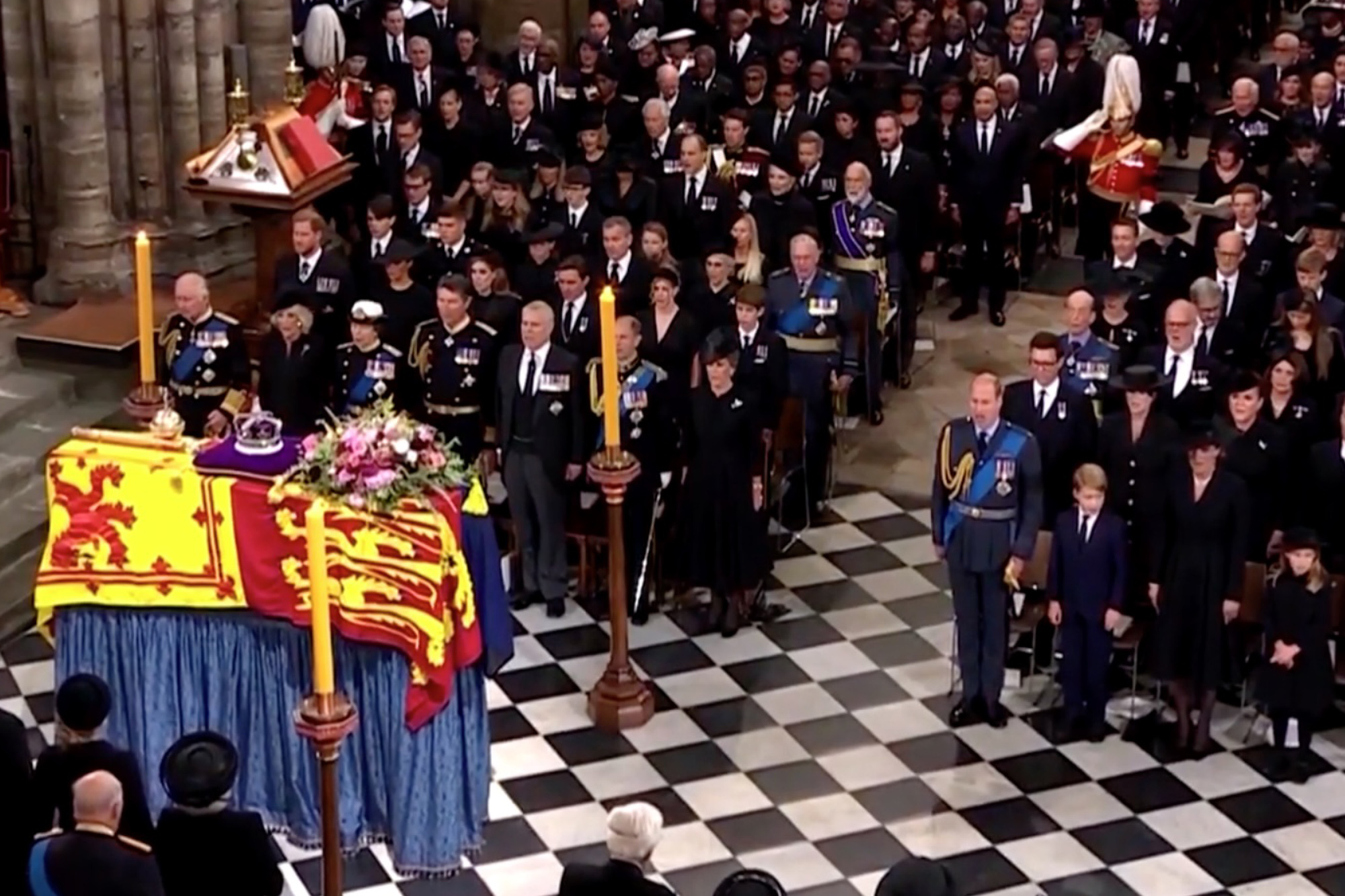 An earlier shot also showed the other senior royals — including Harry’s once-close brother, Prince William, and his family — all clearly singing.

It was not immediately clear if Harry’s wife, fellow royal critic Meghan Markle, 41, was singing a tribute to her father-in-law, with a candle blocking her mouth in the now-viral clip.

An insider close to Harry also insisted that, despite the now-viral clip, the estranged royal did in fact sing the anthem.

Both he and his wife, however, clearly mouthed the words when sung later at the Queen’s committal service in Windsor.

Still, royal watchers blasted the self-exiled prince, accusing him of snubbing the new king despite his promise last week to “honor” him.

“Total, utter, disrespect for his father, the nation, the Crown and the monarch,” UK veteran Mike Murphy tweeted with a series of angry-face emojis.

“Strip him of all of his royal titles and funding. How much will NETFLIX want him then,” he asked of the Duke and Duchess’ million-dollar media deals since quitting the UK and royal life.

Others also insisted it was a clear snub by Harry of his dad, whom he has blamed for bringing “pain and suffering” to him — which ultimately led to his decision to flee to California with his actress wife.

“He couldn’t be anymore disrespectful if he tried,” one royal watcher tweeted, while another noted how it must be “terribly awkward when the king is your dad and you’re sitting right behind him.”

The Duke and Duchess of Sussex had been in the UK for a rare trip when Queen Elizabeth II died. But the exiled royal reportedly only found out about his grandmother’s death five minutes before the palace’s official announcement.

Harry was then forbidden from wearing his military uniform to his grandmother’s funeral, where he also notably sat far from his estranged brother, new heir William, 40.

While William’s eldest children were front and center at the ceremony, Harry and Meghan are said to be “furious” that their own kids, Archie, 3, and Lilibet, 1, may not get His and Her Royal Highness titles.